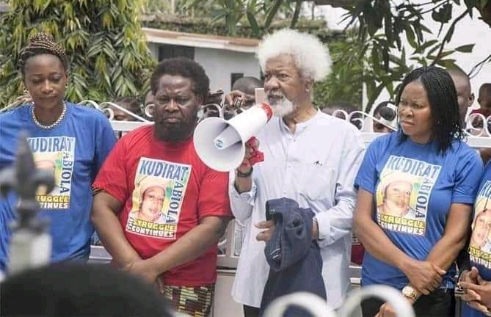 Nat King Cole sang, “Unforgettable”…he didn’t have Alhaja Kudirat Abiola in mind, but he did. Our heroine is in every way unforgettable, 26 years on.

She was murdered on the 4th of June 1996 by the Sani Abacha junta. It is blood curdling today that Abacha’s son inches on to become a State Governor … Look, for 26 years going, the road and the jungle have mixed up.

We must tell our children about our past. Our fights and our fighters. We must drill the virtue of an uncommon Amazon into their consciousness.

That Kudirat, a woman endowed with inner and outer beauty fought for love, fought for principle and died for human dignity.

As they buy and sell delegates like Rago today, Kudirat rejected election fraud. She rejected cheating and insisted on doing right by 14 million voters.

As there was Arthur Nzeribe that time (God rest his soul) and one Kanu.

There was Kudirat and many valiant humans who said NO.

We have had to answer a recurring question every year we celebrate Kudirat…what has changed? I believe nothing has changed, but everything has worsened.

These problems are brought to us by a primitive leadership processing system deliberately established and sustained to keep this place impoverished for the benefit of political brigands.

If what we have seen so far in the political parties’ primaries is clear, then, we kid ourselves with nursing any kind of positive expectations.

However, we must not throw hope away. We must “ginger the swagger” of our children…tell them it is okay to square up their shoulders. They have a rich history in Amazons like Funmilayo Ransome Kuti, Nwayeruwa, Pele Wura, Kudirat Abiola and many more way too numerous to mention. Their lives tell us we are far better than this.

As we celebrate Kudirat Abiola today again, for giving us everything, we must now turn our attention away from the deaf generation.

We must turn to the youth with ears yet…we must tell of Kudirat and the many giants who chose a higher ground above this slime.

Perhaps by so doing, we could, just might rescue tomorrow before today is squandered. Adieu Kudirat Abiola. Rest on in rich memory.

Dr. Joe Okei Odumakin is the President of Women Arise and former leader of Campaign For Democracy