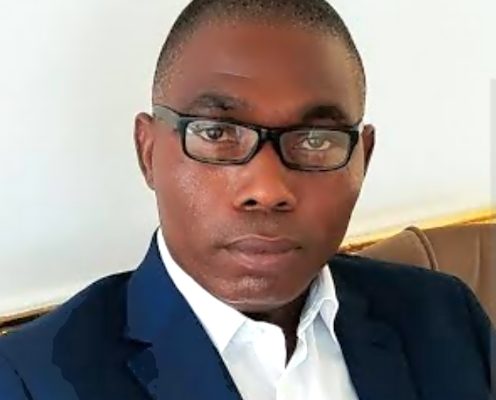 Omooba Adewole Adebayo is one Nigerian citizen who cannot be missed in a horde. The immensity of his numerous aptitudes and the effervescence of his charm stands him out at every gathering.

One can hardly meets a more confident man, an individual who cherishes the life of the mind, invests in its cultivation and continually stand out for his application brain, lucidity and logic.

He easily ranks among the most educated and able Nigerians in any field, and certainly one of the very best yet to hold public office, and one of the most committed to the public good through his philanthropy gestures in Africa and beyond.

Adebayo’s talents are strengthened by a tough character built on the old values that are anchored on hard work, honesty and resilience.

This awesome talent was nurtured in Ondo kingdom and he has devoted his adult life to making it better for all. A direct descendant of Osemawe Odunola, grandson of Osemawe Lamele and direct descendant of Alaafin Onigbogi and Alaafin Sango of Oyo Ile and Elempe, Etsu of Nupe and Oba of Bini, Adewole Adebayo was born on the 8th January, 1972.

After completing his Primary School in Ondo, his mind was sharpened at Saint Joseph College, Ondo and further refined at the prestigious Obafemi Awolowo University where he graduated with honours in Law.

In OAU, not only did Adewole Adebayo run a successful law programme, but also participated in national activism as a Nigerian student.

He was called to the Nigerian Bar in 2000 after completing and passing his bar exams from the Nigerian Law School, Lagos.

In 2002, shortly after his return to Lagos following his NYSC in Kogi State, he joined the Tunji Abayomi law firm where he quickly rose through the rank. Adebayo later acquired Masters of Law at the University of Jos.

Adewole Adebayo participated in the activities of Nigerian Labour Congress as a Comrade and he made friends across Nigeria who admire him for his strength of character, integrity and zeal.

He later left the law firm of Tunji Abayomi for Abuja where he established his personal law firm, “Adewole Adebayo & Co., House of Law”.

As the Principal Solicitor, Prince Adewole Adebayo came into prominence as a leader in his professional field while also investing in the future of young people by employing corps members lawyers and teaching them. With seasoned lawyers as associates and partners, he has groomed many seasoned lawyers one of which is Dr. Kayode Ajulo, former National Secretary of the Labour Party.

The share breath of Adebayo’s knowledge, his broad mind, the clarity of his analysis and his competence soon brought him to the national limelight Adebayo became known as a young man who handles every difficult task with aplomb.

The same qualities that had enabled him to succeed during the Obasanjo’s administration eventually brought him to international limelight as many international businesses and conglomerates began to entrust him with the legal fate of their firms.

A member of the International Bar Association, Adebayo later returned to school in the United States of America, completing the New York Bar Exams in flying colour.

Today, his practice cuts across all the continents of the world.

Adebayo is licensed in California, New York and courts of the United States.

He has substantial law practice experience in UK, Europe, Australia. He is a Fellow, Chartered Institute of Arbitration Nigeria, Singapore and United Kingdom.

He is also President and Board Chairman of several corporations in the US, Nigeria and East Africa.

A farmer and chairman of Agbede Agric Projects, Adebayo is the Chairman of Sai Phytochemicals producers of Sailin drugs for treatment of sickle cell anaemia in India and Nigeria.

As the Chairman of Africa Dialogue Mission (ADM), Adewole Adebayo was in 2006 appointed by the United Nations Organisation and ECOWAS as Commissioner on the Truth and Reconciliation Commission in Liberia
Adewole, a passionate son of the soil, decided in 2016 to relocate his businesses to his hometown of Ondo City in order to contribute to the development and growth of the town and the state as a whole.

In December 2016, Adebayo held a one-week retreat at his country home in Ondo kingdom. It was at this retreat that the objectives and mission statement of KAFTAN TV was birthed.

KAFTAN TV is headquartered in Ondo with additional offices in Lagos, Abuja and Washington DC in the United States of America.

KAFTAN TV broadcasts on StarTimes, Ben TV and Lyngsat. It has been able to reach a wider audience across more than 20 African countries where StarTimes broadcasts, reaching an audience of over 6 million homes with news in business, politics, sports, entertainment and global trends.

Having achieved this milestone, Adewole Adebayo decided to put the local audience into consideration with the introduction of KAFTAN TV Yoruba and KAFTAN Hausa. Already, KAFTAN News channel is available on Channel 480 on StarTimes Dish platform and on Channel 124 on the Antenna for all StarTimes bouquets.

The Yoruba channel can be viewed on Channel 132 DTT while DTH users will see it on Channel 482.

KAFTAN TV has produced 1,022 corps members in its three stations in Ondo, Abuja and Lagos.

The company has successfully retained 103 corps members. On November 18, 2021, NYSC recognised KAFTAN TV as the Best Corps Employers in Ondo zone.
Adebayo extended the training given to corps members to the Ondo Youth in February 2021, after realising that most Ondo indigenes were not benefiting from the TV training.

He partnered with the Ondo Ekimogun Youth to begin broadcast training for the youth in the community. So far, 59 Ondo youths have graduated from the program, and five of them have been offered full-time employment by KAFTAN TV.

Adebayo now sponsors over 500 young Ondo students in Nigerian tertiary institutions, in addition to numerous students from other towns and states who he sponsors in school.

In addition, he has financially empowered hundreds of women in Ondo Kingdom. He does this without making a fuss about it.
Adewole Adebayo is a recipient of many awards in recognition of his service to his State, community and to humanity.

He is a man of gravitas and substance, a proven leader who has produced human resources that has helped the country and the community, a man of the future who has succeeded in bringing thousands of youths out of employment pool, a man who has continued to give children from poor homes hope of a better tomorrow by using his personal resources to cater for their personal and academic need, a man has succeeded in producing high calibre professionals.

He has grown to become an institution and authority whose alumni is a very rich alumnus.

Prince Adewole Adebayo, is a frontline presidential aspirant on the platform of the Social Democratic Party (SDP).