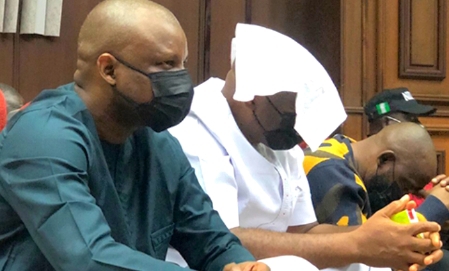 A Federal High Court sitting in Abuja has turned down the application for bail by the suspended Deputy Commissioner of Police (DCP) Abba Kyari who is facing drug related charges.

The court, presided over by Justice Emeka Nwite, held that the National Drug Law Enforcement Agency (NDLEA) has placed sufficient evidence before the court enough for it to refuse the bail application.

The NDLEA in its counter-affidavits to Mr Kyari’s bail application held that it is inappropriate to grant bail to the applicant because of the facts and circumstances of the case.

According to the counter-affidavits, the NDLEA maintained that the applicant is already facing extradition on charges of wire fraud.

The affidavits added that the second applicant, who is an Assistant Superintendent of Police, is under investigation for money laundering and may face charges on same.

“The applicant has had dealings with criminals in line of his duty and may be inclined to engage them in interfering with the evidence.

“The medical challenges of the applicant are not beyond the capacity of the NDLEA”, the NDLEA deposed.

The anti-drug agency also averred that the applicant is a flight risk and might jump bail.

On these premises, the court refused the bail application of the 1st and 2nd applicants.

The NDLEA had arraigned Kyari and four other members of the Intelligence Response Unit (IRT) and two others on eight counts.

The suspended police officer, Abba Kyari, and the IRT members are facing charges bordering on illicit dealing in 21.35kg of cocaine between January 19 and 25, 2022, contrary to section 11(c) of the NDLEA Act.

Following their arraignment, the defendants sought to apply for bail.

They had maintained that they were entitled to bail on the grounds that the alleged offences do not attract capital punishment and that they are still presumed innocent until proven guilty.