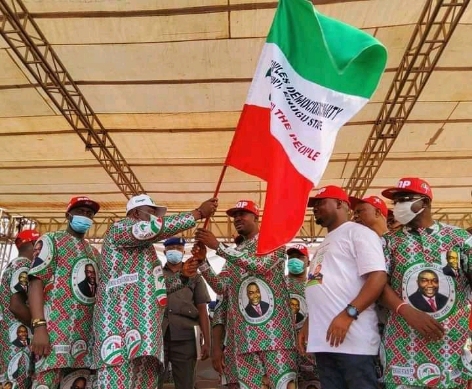 Contents show
1 …. Says Polls Free, Fair, and Credible
1.1 Kindly Share This Story With Friends via:
1.2 Like this:

Conference Of Nigeria Political Parties (CNPP) has reacted to the just concluded Local Government elections in Enugu State, February 23, 2022, appreciating the consistency of Governor Ifeanyi Ugwuanyi in conduct of council polls in the state.

The CNPP also gave kudos to the Enugu State Independent Electoral Commission (ENSIEC), and adjudged the elections as free, fair and credible elections.

The ENSIEC had announced the result of the local government Elections, declaring the ruling Peoples Democratic Party (PDP) victorious in all the 17 local government chairmen positions and all the councillorship positions in the 260 wards of the state.

According to the umbrella association of all registered political parties and political associations in the state, in a statement jointly issued by the Chairman of the Enugu State Chapter of the CNPP, Hon (Dr) Afam Samuel Ani and the Secretary, Hon. Aduaka Anthony A., the chapter admonished the winners to be magnanimous in victory.

“We are, however, asking you to be magnanimous in victory and carry others along in your stewardship for the next two years in office.

“We also commend the Executive Governor of Enugu State Rt. (Hon) Dr. Ifeanyi Ugwuanyi for conducting the election as and when due instead of “planting” care-taker committee Chairmen for the period. We say Cherio to the Governor of peace and excellence.

“We also commend the Enugu State Independent Electoral Commission (ENSIEC) for giving all parties equal opportunity to participate without interference.To you, CNPP Enugu State Chapter says bravo for your well thought out strategies in managing the Elections.

“CNPP, Enugu state chapter hereby adjudge the election as free, fair and credible according to the electoral rules and standard.

“To those who lost, they should bear in mind that in any contest of this nature, there must surely be a looser and a winner”, the CNPP counselled.

The CNPP therefore urged the losers who for any reason feel aggrieved to “follow due process in pursuing their grievances instead of resolving to violence. The Enugu State local government Electoral tribunal is there to listen and do the needful.

“We, the Executives and members of the Conference of Nigeria Political Parties (CNPP) while wishing the elected Chairmen and councillors the best of luck during their tenure and to serve with the fear of God, we also advise them to work within the administrative framework of their office.

“We will not hesitate to criticise any chairman or councillor that arrogates undue power to him/ herself”, the CNPP concluded.

Like Loading...
Previous PostHope Rises For National Action Plan on Human Trafficking in Nigeria 2022–2026 Next PostFull Text of Statement by INEC Boss Announcing Dates For 2023 Elections