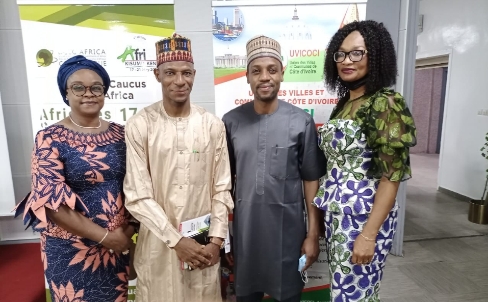 The National Executive Council of the Association of Local Governments of Nigeria (ALGON) led by its National President Hon. Kolade David Alabi has congratulated its representatives over the successes recorded at the high-level strategic caucus meeting of UCLG-Africa.

The meeting was held on the sidelines of the framework preparatory to the 9th edition of the Africities Summit which is the largest congregation of Local Governments elected officials in Africa with well over 5000 expected participants. The Summit and UCLGA General Assembly will take place in May this year in Kisumu Kenya.

The Caucus meeting had in attendance about 16 Countries from the West Africa Region. Members discussed and strategized on a common position ahead of the Africities 9th Summit which takes place every three years.

ALGON is particularly elated with the outcome of the elections into various offices of the UCLG – West Africa Region.

The ALGON National President Kolade David Alabi was elected as an Executive Committee Member, of the UCLG-Africa while the Kaduna State ALGON Chairman Hon. Buba Abubakar representing ALGON was elected as the Vice President of the Young Elected Local Officers (YELO) which is the Youth Wing of the UCLG Africa. Hon. (Mrs) Idowu Senbanjo the Chairman Apapa Local Government Council was also elected as the Nigerian Chairperson of Network of Africa Women of elected Local Government Officers (REFELA) and the Director-General of ALGON (Mrs) Binta Adamu Bello was also elected as an Executive Member of Network of National Association’s of Secretary Generals in West Africa.

Also speaking on the outcome of the meeting, the (NEC) commended the leadership of its National President Hon Kolade David Alabi whose vision is to integrate and position ALGON and indeed the Nigeria Local Governments to their rightful position in the comity of Nations.