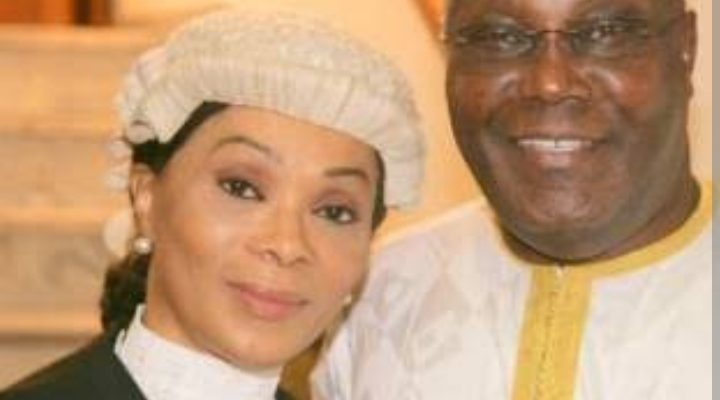 Contents show
1 *Asks Atiku to Perish 2023 Presidential Ambition And First Settle Domestic Squabbles
1.1 Kindly Share This Story With Friends via:
1.2 Like this:

Calling on members of the organized women’s rights community to speak out in defence of one of them, the now estranged wife of Nigeria’s erstwhile Vice President Alhaji Atiku Abubakar, a call has gone to the Inspector General of Police Alhaji Usman Alkali Baba to diligently investigate allegations of threats to life made against former Vice President Atiku Abubakar by his estranged wife Mrs. Jennifer.

The Human Rights Writers Association Of Nigeria (HURIWA) gave the charge to security services to prevent anything untoward from happening to Mrs. Jennifer, former wife of Atiku Abubakar.

The leading civil rights advocacy group specifically asked the former Vice President to go and settle his boiling domestic affairs and prevent the alleged threats to his estranged wife from happening rather than dissipate energy in seeking elective position in 2023.

“We are alarmed just like millions of other Nigerians, to read the shocking allegations made by the vastly educated and extensively travelled former wife of Nigeria’s erstwhile Vice President and we are worried by the disturbing disclosure alleging that she is subjected to death threats by agents allegedly working for the former second most powerful man in the largest black nation in the world – Atiku Abubakar – and we are writing to demand that the security forces need not stay aloof, do nothing until the alleged threats are probably carried out but should suo moto, initiate diligent investigations by inviting all the parties remotely or immediately linked to this worrying development.”

The Prominent civil rights advocacy group added: “We all know that those who have held such powerful political positions in Nigeria are very much politically connected all their lives. So we urge women’s rights defenders to speak out and demand that nothing untoward should happened to this distressed Nigerian citizen Jennifer who said she had to run out of Nigeria for fear that the alleged threats to her life for seeking for divorce from the former vice president will be carried out.

“This is now a national problem that has to be handled with every commitment and professionalism. No harm should come to that distinguished daughter of South East of Nigeria and her Children.

“Whilst we hold no brief for either of the parties, we think that this matter that is now in the public domain must not be overlooked because of the political status of the person being accused rightly or wrongly.

“We are not in a position to confirm or deny the allegations, but we think allegations of threat to life are critical and section 33 (1) of the 1999 Nigeria Constitution obliges the federal government to protect the right to life.

“Based on the extent of information made available on the feud between Atiku and his wife who now seeks for divorce, we in the civil society community thinks it is more paramount for His Excellency Alhaji  Atiku Abubakar  to concentrate efforts to ensure the safety of his erstwhile wife who is afraid for her life and he should leave the political stage for persons who are ready to lead Nigeria so he can settle his domestic dispute because it is illogical to seek political and public office when the public is inundated and bombarded by allegations of such a magnitude by the estranged wife of the former Vice President about alleged domestic squabbles,” HURIWA affirmed.

HURIWA recalled that Jennifer, a lawyer, and one of the wives of former Vice President Atiku Abubakar, had confirmed her divorce to the former presidential candidate of the Peoples Democratic Party (PDP).

In a statement obtained on Tuesday, the ex-VP’s wife explained that she didn’t request divorce because Atiku married a new wife.

“That His Excellency married a new wife was never the cause of our problem as many have said. His Excellency is a Muslim and I have never questioned him or intended to ask him about his wives,” she said.

According to her, some of Atiku’s friends tried to mediate and stop the divorce but their efforts failed.

Jennifer explained that “the core reason for the divorce was disagreement over my continued stay in the United Kingdom” among other “long-standing issues”.

She also claimed that Atiku had requested to collect an asset previously given to her, adding that the property in Dubai is a subject of litigation.

She said Atiku had promised to give her the equivalent in value of the Dubai property, but reneged.

She also alleged that aides to the presidential candidate of the PDP are threatening her.

She said: “For some time now, especially in the last few weeks, there has been a whole lot of rumours in circulation about the state of my marriage to his Excellency Alhaji Atiku Abubakar, the Waziri Adamawa, GCON.

“The stories got more vicious as they continued to circulate. I deem it necessary to defend myself against the calculated propaganda to malign my character and position me in a bad light and damage my name.

“Without resorting to nonsensical talk, I would address the two key issues at hand:

(1) That I asked for a divorce because His Excellency got married again.
(2) That I sold his Excellency’s house in Dubai.

“On June 26, 2021, I asked His Excellency to grant me a divorce in light of the breakdown of our marriage. And, during that period, I told him that I remain at his service to continue to assist him in his activities even if I am no longer married to him.

“Suffice it to say that several friends of his Excellency tried to mediate in this matter. I thank them most graciously and remain grateful for the efforts of people like Peter Okocha, Senator Ben Obi, Tunde Ayeni, Captain Yahaya and Senator Ben Bruce.

“The core reason for the divorce was disagreement over my continued stay in the United Kingdom, to look after my children and several other long-standing issues.

“I needed to play the role of a mother at this time to the children who have gone through the absence of both father and mother growing up; especially, with the passage of my elder sister who used to look after them.

“Furthermore, in light of COVID-19 times, choosing to stay with the children was nonnegotiable. And, in line with Northern culture, the new wife takes up the baton so I can also focus on giving the kids more care,” Barrister Jennifer explained.

HURIWA has therefore asked that “the security forces should be proactive and take actions guided by law to stave off any danger or harm from happening to her since she has made a public appeal to save her endangered life and we are demanding for open and transparent probe.

“We call on Women’s rights advocates to wake up and defend her”, HURIWA concluded.