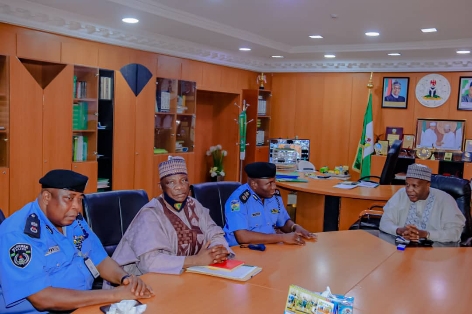 Gombe State Governor, Muhammadu Inuwa Muhammadu Inuwa Yahaya says community policing is a matter of priority to his administration in its drive to sustain the prevailing peace and security in the state.

He stated this while playing host to the newly posted Assistant Inspector General of Police for zone 12 in charge of Gombe and Bauchi States, AIG Audu Adamu Madaki during a familiarisation visit to the Governor in his office.

The Governor said to buttress the seriousness with which his administration views the issue of community policing, he created a ministry for internal security and ethical orientation with a view to having a more robust and constant engagement with the security agencies and relevant stakeholders.

Governor Inuwa Yahaya said the idea behind creating the State Ministry of Internal Security and Ethical Orientation was to get to the grassroot and to strengthen synergy with the traditional rulers so that security of lives and property can be guaranteed.

He said, “the issue of community policing which you mentioned is really a priority to us here in Gombe State and I know is a priority for the whole country too. So we must provide the framework for its success.

“The Commissioner for internal security is here and is only this time around that on coming to office we created that Ministry because that is the vision that we have to create a very robust, deep rooted and functional security architecture to ensure close monitoring by the government and major security agencies especially the police.

“Is not easy to implement because it has a lot of financial implications but I know with your support we can achieve the target of ensuring a functional security that is beneficial to our people”.

He explained that other challenges abound due to the centrality of the State at the midst of the north east, making it a preferred destination for IDPs owing to its peaceful atmosphere and easy access.

While describing peace, security and tranquillity as the bedrock of any meaningful development, the Governor assured that his administration will continue to priotise the safely and well being of the citizenry.

He noted that the prevailing peaceful atmosphere in the State has accorded his administration the opportunity to provide services to the people spanning through social, economic and infrastructural development.

He described the relationship between the Gombe State Government and the Nigerian Police as symbiotic which presupposes that as the State provides support to the police, the force should on the other hand redouble its efforts towards the maintenance of peace and security.

Earlier speaking, AIG Audu Adamu Madaki described Gombe as a perfect State in terms of crime prevention, detection and prosecution. He commended Governor Muhammadu Inuwa Yahaya for taking proactive measures in addressing security issues in Gombe State and for his support to the Nigerian police and its sister- agencies.

“By my personal assessment, Gombe is a quite State in the North East and not only in North Eastern states but in Northern Nigeria because there is a superb synergy among all the security agencies and of course a very superb support from the State Government and I believe if this synergy continues as the Governor is demomstrating, Gombe State will continue to be a safe haven in the north east and the entire nation”.

Like Loading...
Previous PostOpen Grazing ban Will Promote Healthy Living in Delta - Commissioner Next PostN287bn Profit: We Commend Your Efforts But Doubt Your Figures – CNPP To NNPC GMD, Kyari