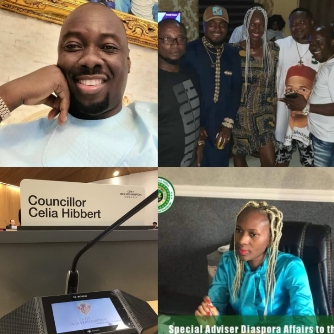 The immediate past, Special Adviser to Imo State Governor on Diaspora Affairs and Elected Councillor For Penn Ward Wolverhampton, United Kingdom, Hon. Cllr Celia Osakwe-Hibbert has recommended what she described as the CUBANA POLICY to South East Governors.

Hon. Celia Osakwe-Hibbert who spoke while reacting to the events that trailed the burial of the mother of Obi Cubana, said “Before I commence, can I start by saying; May the Soul of Obi Cubana’s Mum Rest with the Lord. Amen.

“Going by the glorious ‘Eastern Shut-down’ over the weekend it is clear that Obi Cubana has got something clearly right; be it entrepreneurship, social emancipation, youth empowerment, entertainment, gender inclusion.

“Literally, the event at Oba has shown that Government Appointments/Jobs isn’t and shouldn’t be the only aspiration of our people. Our citizens can be successful outside the Government and Obi Cubana and his associates somehow have clearly proven this!”, Hon. Osakwe-Hibbert said.

The rest of her statement reads:

So the question now is how can the Government multiply these individual successes? b

If the Eastern Governors are serious about creating Youth Employment, eradicating crime and if they are serious about raising the regional GDP growth rate, they must now commission ‘An Obi Cubana Policy’. This policy will be bold and must be aggressively implemented in the Eastern Region. This will be more economically salvaging than using ‘Fulani Herdsmen’ as a cheap excuse for the perennial economic downturn in Eastern Region.

The Obi Cubana Economic Policy should include but not limited to;

50% Budget Sequestration. Relinquish 50% of the State budget to Obi Cubana and his nuclear group to administer but not without independent scrutiny…

State Deficit Reduction. If Obi Cubana’s event can raise over half a  billion naira in one weekend then we can use this drive to formulate mutual taxation. Debt free states can be more trusted internationally.

Diversification. What items are popular in large ceremonies and how to enable young people to engage in these trades/ set up local production companies with Government backing… Can you imagine nearly 300 cows donated, how many Easterners supplied, probably none?

Debt Reduction. How the Government can reduce or write off individual and family debt giving Citizens opportunity for a fresh start through mutual donations like Obi Cubana’s type… Government could create bubble of successful individuals (social engineering) etc