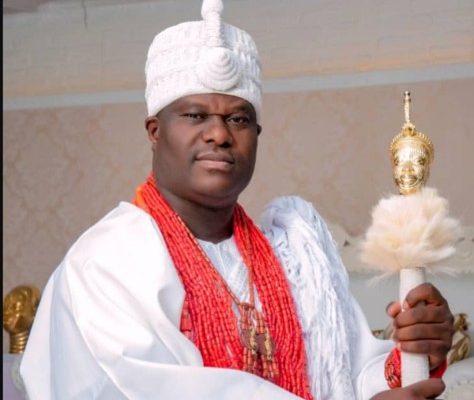 This is contained in a release issued by the President-General of Grand Council of Yoruba Youths, Comrade AWA Bamiji which was made available to the pressmen in Ibadan.

In the release, the Influential Youth Leader, AWA Bamiji stated that,”This is to congratulate Arole Odu’a, Oba Adeyeye Enitan Ojaja II, Ooni of Ife, on the successful inauguration of Ife Grand Resort and Industrial Park by the Governor Gboyega Oyetola of Osun State.

“The leadership quality of Kabiyesi, love for youth empowerment and his strong passion for the socio – economic development of Osun State in general and that of Ile – Ife in particular are highly commendable and these have been once again openly demonstrated with the historic commissioning of these two important ‘Business Centres’. We couldn’t do otherwise than to say “Kudos for taking these giant steps”, he lauded.

AWA Bamiji further said that,”We are very happy to identify and rejoice wholeheartedly with the following Civil Society and Political Leaders of our time on their Birthday anniversaries, Comrade (Mrs) Kehinde Ola – Oni and her twin Sister, (Mrs) Taiwo Adesida at 78, both are fondly referred to Ola – Oni Beauty Queens after jointly winning Miss West, in June 7, 1965, which was the first Beauty Peagent in the old Western Region of Nigeria. We also, congratulate Osun State Deputy Governor, Benedict Olugboyega Alabi at 56; immediate past Speaker of Osun State, Rt (Hon) Najeemdeen Folasayo Salam, alias Iwaloye at 56. We thank God for your individual lives, for being the people’s advocates, quintessential leaders and trailblazers in your respective fields. Therefore, to you all, we say many happy returns.

“We felicitate our dear friend of decades and the Spokesperson of Ooni of Ife, Comrade Moses Olafare, on his induction as fellow, ’Fourth Estate Professional Society’ alongside other top journalists in Nigeria, which was held last Thursday, inside Subomi Balogun Conference Centre, University of Ibadan, Ibadan, Oyo State. Like I told you earlier, ‘Oye a mo’ri. Bo rire kan Ore mi, emi gan gan lori re kan o’ “, he congratulated.

“Solemnly, we are now sympathising with the families, friends, associates and the respective State Governors of the following departed Souls, Edo born Business Magnate, Philanthropist, Politician and Chairman, Ocean Marine Solutions (OMS), Captain Hosa Wells Okubo who died at 64, former General Overseer, for a decade, Foursquare Gospel Church, Rev Dr Wilson Badejo, who died at 74, our Senior and revolutionary Comrade, a Lanlete Born Rights’ Activist and NANS Pioneer President, Danladi Sunday Oladele, a.k.a Lado, who died, days after Yaba College of Technology approved his Certificate, 40 years after Graduation, and Ayefele Publicist who doubled as the General Manager, Fresh FM, Ado Ekiti, David Ajiboye. The news of their deaths came as rude shocks but we took solace in the fact that everything happened according to the knowledge of Almighty God. May their gentle souls rest in peace. May their gentle souls rest in peace.