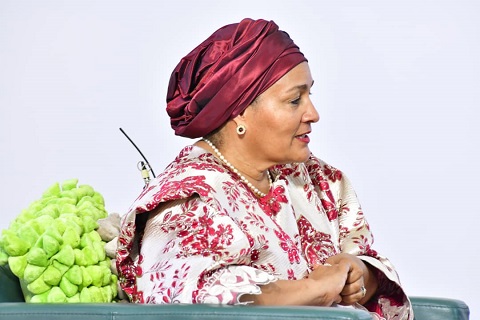 Contents show
1 …As Governor Inuwa Describes UN DSG as Epitome of International Relations and Diplomacy
1.1 Kindly Share this story via:
1.2 Like this:

It was a delightful evening full of radiant joy and pageantry as Governor Muhammadu Inuwa Yahaya of Gombe State, earlier today at the Shehu Musa Ya’Adua Centre in Abuja, gave the opening remarks that flagged-off series of activities lined up for the celebration of the 60th birthday of an illustrious daughter of Gombe, Hajiya Amina Muhammed, the Deputy Director-General of the United Nations.

While giving the opening remarks at the occasion, Governor Inuwa Yahaya described the Deputy Secretary General of the United Nations as an epitome of international diplomacy who defied social and cultural barriers to rise to the peak of her carrier as an excellent administrator in global affairs. 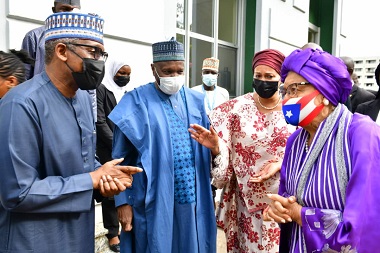 At the Birthday Anniversary Symposium with the theme “Overcoming the Challenges of Africa’s Transformation”, Governor Inuwa Yahaya explained that considering the humble background Amina Mohammed came from, he has no choice than to admit that the international diplomat is an extraordinary personality who always strives to make the most of any assignment given to her.

To this end, the Governor said that her 60th birthday is not only worth celebrating but an avenue to showcase her determination, dedication, commitment and the undying spirit of pan Africanism.

Regaling in Amina Muhammed’s background, Inuwa Yahaya said “Going by her background, ordinarily in pre-independence Nigeria, no one would not have expected that a typical Fulani man that came out from the North East where unfolding events shows vulnerability and lack of development could have at that time travelled to study at the United Kingdom and not only so,to look at the nature of his people and decide to take a way that could advance their course. A typical Fulani man that went to study veterinary medicine and not only that but going higher to consummate an arrangement and married a Scottish woman”.

This consummation of nuptial relationship, Governor Inuwa Yahaya observed, eventually gave birth to Amina Mohammed who is being celebrated as an international figure and an icon of diplomacy today, adding that since her days with Noman and Doban, the diplomat has been of immense help to the then Bauchi State and the present Gombe State particularly in the areas of health, education and subsequently in environmental protection when she held sway as the Minister of Environment for Federal Republic of Nigeria.

He said her doggedness to turn around the fortunes of her home State, Gombe led to the establishment of the Federal Teaching Hospital in the State which has a mega health sanctuary where many are today seeking medical attention across the Northeast Nigeria.

Governor Yahaya further described Amina Muhammed’s contribution to humanity from her days in MDGs and SDGs to Nigeria’s Minister of Environment and her current position as the United Nations Deputy Secretary General as incredible and a tonic for global peace and cooperation, describing her re-appointment as the UN Deputy Chief as most deserving.

“We are very proud of her performance before now and going forward into the future, I see Amina as a special gift, a golden gift not only to the people of Gombe State and Nigeria but infact to the whole world,seeing the role and the job she is doing now of trying to transform the world and make it a better place for all of us to be proud of”.

Governor Inuwa Yahaya said Amina’s experience remains a thing of pride to the people of Gombe State owing to her superlative performance and contributions to humanity, assuring the diplomat of the support of the Government and people of the State.

The Governor challenged the high and mighty in the society to return to their people and bring the change they so desire to see as exemplified by Amina Mohammed both in her thoughts and deeds.

He said his administration is poised to continue to encourage more women to attain their full potentials, saying “Gombe under my watch has deemed it necessary to appoint two women to head the civil and teachers service commissions which are areas of human resource management and public administration.

Governor Yahaya said further that he appointed three women into key ministeries to boost efficiency in governance, participate in decision making and to move the State forward, challenging other states across the country to borrow a leaf from Gombe State. He noted that if women are given the opportunity, the level of retrogression the country has experienced could have been avoided.

Commenting on the topic of the symposium, Governor Yahaya described the theme as very apt and an opportunity for policy makers to think and learn deep so that Nigeria and the rest of Africa can be transformed in line with present day realities.

“Africa is a continent at odds with itself. It is therefore heart-warming today’s lecture is to be delivered by another icon and Africa’s gift to the world – Ellen Sirleaf Johnson. This towering leader broke the glass ceiling by being the first female President in Africa”.

The 60th birthday lecture was a parade of VIPs with notable national and international personalities in attendance.

Emir of Gombe, Alhaji Abubakar Shehu Abubakar III served as royal father of the day and was represented at the occasion by former Minister of FCT, Dr. Aliyu Modibbo Umar, who paid glowing tribute to the celebrant, describing her as a patriot who has continued with the legacy of serving people throughout her career as bequeathed by her late father.