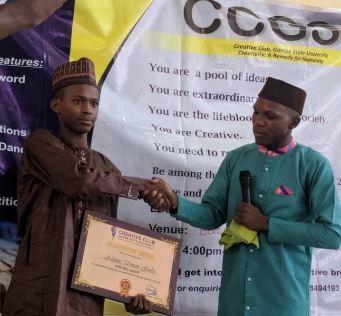 Garko was named as the awardee at an inauguration and handing over ceremony of the club executives held on Friday, June 25, 2021 at the university’s science complex.

This is not the first time Garko is winning an award from the club. It will be recalled that in 2019, Garko, who was a secondary school student at that time won the first prize in the club inaugural essay writing competition beating all of the university’s students.

According to the club, Garko was honoured “in recognition of his tireless, innovative and continuous support to the club”.

While presenting the award on behalf of the club, the outgoing president, Samsonkefas Cephas, said Garko has been the source of his strength.

“Adamu Usman Garko has been a very good supporter. He supports the club financially. Some of the programs we have been doing online, graphics design, giveaway, we partnered together. And some of these amazing works you have been seeing online, is as a result of direct support from our dear Garko.” Cephas said.

Garko, who spoke to our correspondent in Gombe this weekend, said “I am pleased, honoured and humbled to receive an award from Creative Club Gombe State University. To say that I am delighted to receive this important award from one of the biggest communities of intelligents in Gombe State is an understatement.” He said.

“My unrestrained avidity of appreciation to the pioneer president, Samsonkefas Cephas and his amazing team for bestowing me with such a special award. I feel highly overwhelmed and emotional and I am at a loss for words. I count the presentation of the award as one of the special moments of my life.”

“It also makes me reminiscent of what a long journey of four years it has been engaging actively in raising resourceful, innovative and creative minds in Gombe State. In Shaa Allah, we’ll continue to work harder for the betterment of our societies. May Allah continue to bless our efforts”, Garko prayed.