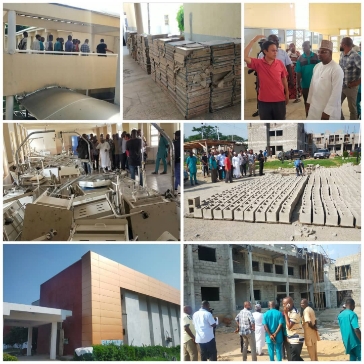 In a bid to turn the fortunes of the state around, Kogi State Government under the leadership of His Excellency, Alhaji Yahaya Bello have invested hugely in infrastructural development across the 3 Senatorial zones of the state, to the admiration and commendation of all.

Today, the State Honorable Commissioner for Works and Housing, Engr. Abubakar S. Ohere, FNSE began an assessment tour of the ongoing Housing Projects across the state.

Starting with the Ultra Modern General Hospital in Gegu, Koto-karfi, Kogi LGA, the honorable commissioner was conducted round the facility by the site Engineer, Mr. Ezekiel Marcus.

The visit was part of his efforts to ascertained the level and quality of work done so far.

Engr. Ohere who spoke to the Community after the inspection said, “as you can all see, Governor Bello is more than determined and committed to bringing here the best ultra modern hospital to the people of Gegu and the neighbouring communities to improved their health care delivery.”

He further stressed that, this noble venture will go down in history as an epoch making event once commissioned and fully operational and all those involved will surely reap huge divine results courtesy of the prayers of both the would be patients and those that will also be provided with various forms of employment when the Hospital comes into full operation.

He commended the handlers of the project, Feranmi Greenfield Resources Ltd for the quality of job being done and urged them to ensure completion is attained within the marked period as the state Governor is eager to deliver on his campaign promises to the people of the state.

Thereafter, Engr. Ohere headed to the Kogi State Polytechnic, Lokoja, the state capital, where he was warmly received and conducted round the institution by the Rector, Dr. Usman Ogbo.

Overwhelmed by the construction and renovation works done within the polytechnic, Engr. Ohere commended the leadership style of Dr. Ogbo and urged him to keep the torch burning.

He made observations and recommendations and declared the readiness of the ministry where interventions are required, with the usual support of His Excellency.

He reiterated Governor Bello’s resolve to not only ensure the state institutions perform excellently and maximally, not fall short with the academic calendar but also have conducive learning environment for effective acquisition of knowledge.

The physically elated Rector, Dr. Ogbo appreciated his August Visitor for the honor done to him and the institution.

He dedicated his much applauded wins to Governor Yahaya Bello for his tremendous supports.

In a similar development, Commissioner proceeded to inspect the ongoing construction/renovation of the State Specialist Hospital, Lokoja as part of measures to make quality healthcare services available to residents of Kogi state and its environs.

Speaking immediately after being conducted through by the Site Engineer, Mr. Lawrence, Engr. Ohere said that the essence of the inspection was borne out of the need to ascertain the progress achieved so far by the contractor handling the project, to know whether work is being carried out according to specifications.

Ohere reiterated Government’s commitment to the completion of the ongoing renovation and construction work at the Specialist Hospital lokoja.

He revealed that the hospital project is dear to the heart of Governor Yahaya Bello, explaining that it was for that reason he has gone steps further to seek expert advice on how to upgrade the services to world class standard at the specialist hospital, Lokoja.

He noted that the Governor has done so much for the health sector in the state, which includes the setting up of the healthcare plus in the State Health Insurance Scheme.

He observed that the ongoing building of Referral Hospital in Kogi Central Senatorial District and building several Primary Health Care Centers across the State have in no small measure improved the standard of the health sector in the state.

Explaining further, Engr. Ohere said the remodeling of the specialist hospital was to meet world-class standard.

On work done so far, the Commissioner noted that progress has been made, commending the state of the work, saying it has reached an advance stage when compared to what was on ground as at his last visit. He therefore rated the level of work to be 60 percent completed.

The Street Reporters Newspaper gathered that the next phase of the housing projects inspection is expected to cover Isanlu, Kogi State University, Anyigba, Idah, CUSTECH, Osara, and Eganyi where health and school projects are ongoing.